Social media analytics is constantly changing and currently it seems that we are moving into phase two.

Phase one of social medi analytics was mostly about number of followers, fans, posts and tweets. The idea was that if you have a large number of fans, then you were doing well. That makes sense and often a site with more fans is doing better than a site with less fans. At the end of phase one, we begun to understand that the sheer number of fans is less important than what how these fans are engaging. To use an extreme example – a site with a thousand fans who do not engage is not as useful as a site with 100 fans who talk a lot.

As we move into phase two of social media analytics, we are starting to understand that what people are saying is more important than how much people are saying – quality vs quantity. If we continue to use the example above, we see that a site with 10 fans having a discussion with a particular goal in mind is worth more than a site with 100 fans where the discussion is not focused.

In phase two of social media analytics, we are measuring and analyzing discussions. We try to understand which users seem to be leading discussions and which users seem to be following. Keyword analysis is used to increase the understanding of language. Through user and keyword analysis, together with sentiment and emotional analysis, we get a reasonable good understanding of users’ behavior, whether they are our customers, potential customers, our competitor’s customer or simply users interested in some subject where we have a stake. 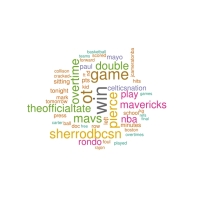 Klurig Analytics have developed a phase two social media analytics service. Our technique is used in a number of different places including live sporting events. This graph shows the sentiment of fans from Boston talking about Boston Celtics versus fans from Dallas talking about their Dallas Mavericks. The data is based on Twitter postings and the graph was shown live. 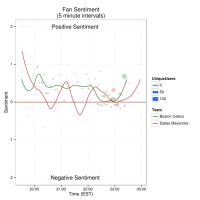 In this game (Dec 12, 2012), Celtics was leading most of the game until towards the end, where Mavericks went ahead a few points. At that time – about 10:10pm on the graph – the sentiment between the Boston fans and Dallas fans changed. At regulation, the game had tied. The game then continued with two five-minute overtimes where Celtics finally stood as the winnner. Again, this is reflected in the Boston fans’ sentiment a few minutes after 11pm. Also, take a peek at the top graph at around the 11pm to see the increased number of tweets during the overtime.

As a marketer, you can not afford to miss an increase or decrease of this magnitude in a discussion about your products, services, competition and industry.

We use the social media analysis technique in sporting events mostly for fun. In reality, you would use Klurig Analytics’ technology to measure your and your competitors’ fans’ discussions for at least the following primary reasons:

This site uses Akismet to reduce spam. Learn how your comment data is processed.